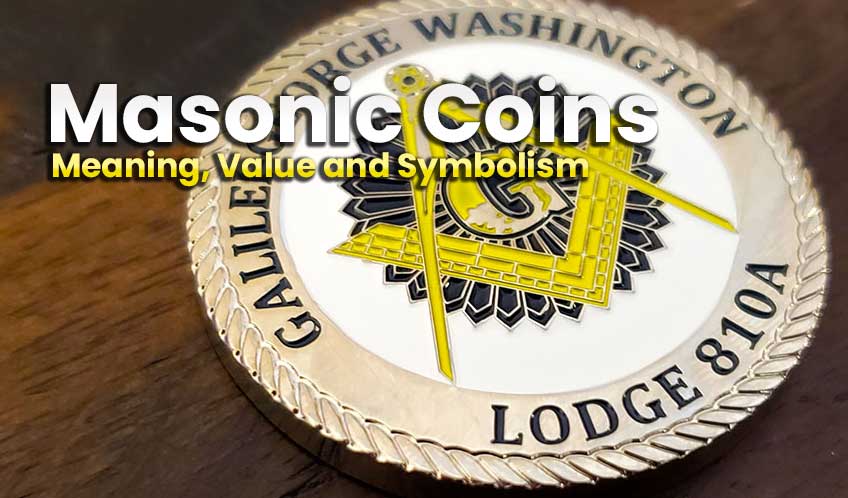 Today’s Freemasons have a rich history dating back to guilds of stonemasons and cathedral builders of Medieval Britain. Though much of this group is shrouded in secrecy, it’s a form of a fraternal organization that regulates the qualifications and characteristics of members. Rich in symbolism, one of the ways Freemason’s express recognition is through masonic coins.

So much more than keepsakes, masonic coins serve a higher purpose. These coins have been used for centuries to identify members as well as represent the many different lodges across the world. In this guide, we’ll explore the world of masonic coins, including their meaning, value, and symbolism.

What Are Masonic Coins?

First, what is a masonic coin and how does it differ from other custom, collectible coins? These are believed to date back to the 18th century. During the 1700s, Freemasons carried unique coins as a way to prove they were members of their fraternal group. As more lodges appeared across the globe, these became even more distinct to identify different regions and groups.

With that in mind, what are masonic coins used for? A mason coin can be used for any of the following purposes, depending on its unique design:

Ultimately, masonic coins represent the values of the Freemasons. This fraternal order is based on several important ideals, like chivalry, equality, and liberty. Because members are expected to be active, upstanding members of their communities, coins honor their special dedication to service.

What Do Masonic Coin Symbols Mean?

Speaking of values, the symbolism of masonic coins reflects the vast values and characteristics of Freemasons. These symbols might appear unusual to outsiders, but they’re rich in history and meaning. Though each lodge might have its own unique symbols, here are some of the ones you might encounter the most often:

Vintage masonic coins might have their own meanings, some of which aren’t known to outsiders. As you can see, masonic coin meanings are diverse and purposeful. Designed to signal core values and characteristics, there is a story each coin tells to its beholder.

What’s the Value of Masonic Coins?

Another common question about masonic coins is whether they hold much value. The short answer is yes, in many cases. Because they’re powerful symbols, they represent the history and characteristics of each lodge. Many of these coins, like the 1904 masonic coin, are considered valued collectibles.

Freemasons particularly have a longing to uncover the truth of the past. Discovering knowledge is one of the core values. Receiving coins as a Freemason member is a high honor, but it also preserves valued history. A quick internet search shows how varied resale values are amongst rare masonic coins, but the value is also in its secrecy.

Masonic challenge coins are carried by lodge members, and they’re a way to enhance morale. Over time, these gain value in themselves. However, they’re worth much more by way of symbolism, togetherness, and comradery. Custom Masonic lodge coins hold special meaning for recipients, and they become a family heirloom worth passing through generations.

Most Freemasons consider masonic coins priceless in value. To outsiders, they’re a glimpse into a secretive and revered fraternal order. To members, they’re a reminder of how far the organization has come over time. Signifying pivotal parts of initiation, rites, and moving up in ranks, there’s a good reason these coins are so coveted.

Design Your Own Masonic Challenge Coin

Finally, it’s never been easier to design your own masonic challenge coin. Whether you need a custom design or you have one in mind, this represents your unique bond as a lodge. Most masonic coins are 1.5” to 1.75” in size, but they can vary depending on your wishes. Using tried and true enameling techniques, only the highest quality coins are carried and exchanged amongst Freemasons.

As an organization built with service and high values in mind, Emblemholics understands the unique requirements of Freemason coins. Contact our professional, experienced team today to create a masonic coin designed specifically for your lodge or group. Each coin is made special, honoring your own history of service. 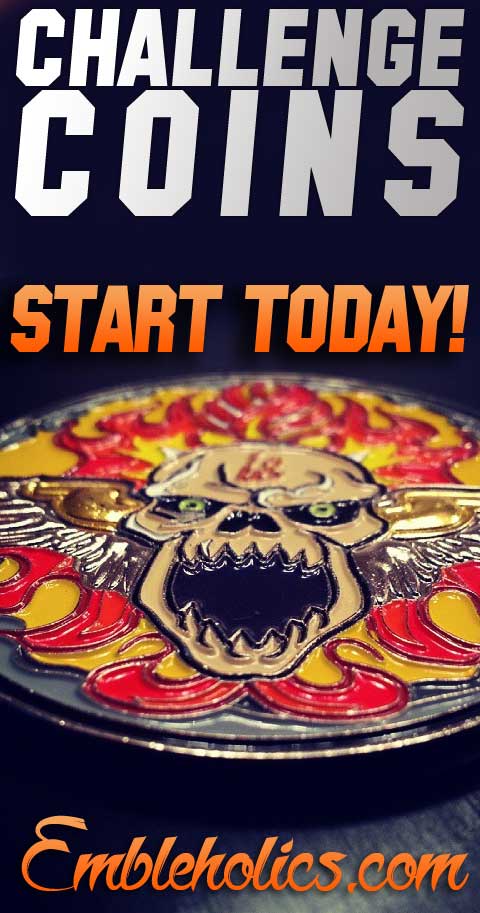